Jane and I were in Boone, North Carolina last weekend for the fourth of July. I was pointing out some of the local sites, including Horn in the West, the work of historical theater offered al fresco that tells the story of Daniel Boone. The conversation went something like this:
ME: So there is an outdoor drama here, Horn in the West. It's about Daniel Boone. There is another one in Cherokee, NC. It's called Unto these Hills. It's about the Cherokees. When I was little, we went to another one in a town called Snow Camp, North Carolina. It was called Sword of Peace. It was about Quakers. Of course the most famous outdoor drama was The Lost Colony. It was about the settlement that disappeared during early settlement of the colonies. Do you have Outdoor Dramas in Oregon?"
JANE: I am not sure I know what you are talking about.
ME: You know, a historical drama, in an amphitheater. Don't they do that in Oregon? Andy Griffith was Sir Walter Raleigh in the Lost Colony.
(It's a sign that I have veered dangerously off course into Tarheel nostalgia when I offer Andy Griffith as a point of reference. This sometimes happens when we talk about the Pilot Mountain, the interesting geologic formation to the north of Winston-Salem.)
Internet research tells me that North Carolina outdoor dramas also include From this Day Forward and outdoor drama about the Waldenses. (For those not familiar with the Waldenses, they were a religious sect from southeast France dating back to the 1100's that survived persecution in their homeland and came to North Carolina in 1893 to establish a "colony" in Valdese.)
There is also multimedia production about Jesus and some very respectable actors in Asheville that do Shakespeare in a park.
A comparable query suggests that Oregon has an outdoor drama entitled the Happy Canyon Pageant but sensibly sticks to Shakespeare and Gilbert and Sullivan.
And it turns out that all these data come from the Institute of Outdoor Drama conveniently located at East Carolina University, suggesting that I am not alone in noting this interesting phenomena.
Posted by Claudia at 8:56 AM No comments:

On December 31, 2010, despite having made three discrete sets of plans in different parts of Manhattan, with the last one across the street from Jane's apartment, we ended up ringing the New Years staying in. Jane wasn't feeling well, and one by one, the plans all were jettisoned. At 11:30 when we were planning to walk across the street for champagne with our neighbors, even that seemed like too much. The adolescent part of me that always wishes to be out somewhere really fabulous on that evening was mollified by the fact that we watched Chungking Express instead of going out. Getting Jane to cheerfully agree to watch a movie is usually a little bit of a sell, but on New Year's Eve in, I had the advantage. I shamelessly exploited it.
It was the second time I had seen it, but I thought the sweetness and particularity made it perfect for New Year's Eve. Quentin Tarantino's douchey introduction on the DVD notwithstanding, Jane also allowed that she appreciated its quirky, ambiguous love story.
There we were under a pile of blankets, each with a full glass of prosecco. This makes me happy, I thought. What if I could get Jane to agree to do this once a month with me? After the film ended, I made the pitch. Would she be willing to sit down twelve times in 2011 and watch a movie of my choosing without any multitasking? With the expectation of finishing it? The benefit to her was that likely that for the remainder of the month she'd be left alone to do whatever she wanted when I had something to watch. Jane wasn't entirely sure this was going to work out in her favor, but she agreed, and I had the green light to come up with a list of 12 movies.
Now, the trick wasn't to make Jane watch my twelve favorite movies. Nor was it to come up with twelve foundational movies to exposed her to. (How much of a blowhard would that make me?) The idea was to pick movies that for one reason were another were important to me, that she would also enjoy. Or at least appreciate. (Movies that Jane did not tolerate include Lucrecia Martel's La Ciénaga and The Red Balloon.)
I just like watching movies and I wanted to do it with my sweetie.
We are almost halfway in, and so far so good. Here is what we have so far:
January - Chung King Express, Wong Kar Wai
February - Kung Fu Hustle, Stephen Chow
March - Talk to Her, Pedro Almodovar
April - Celestial Clockwork, Fina Torres
May - Night on Earth, Jim Jarmusch
Kung Fu Hustle was actually in Jane's Netflix cue, but I thought it should count since I had seen it and liked it, she hadn't seen it, and we were going to watch it together. Jane picked Night on Earth after watching the trailers for it and Down by Law. Of all of these, the one she seemed to like the most is Celestial Clockwork.
As to the second half of the year, Run Lola Run is the next in my cue. At this point, I am not sure about the others. Bonnie and Clyde and Women on the Verge of a Nervous Breakdown seem like good candidates. It seems like it would be good to throw in some Hitchcock. And I haven't seen Seven Samurai, so maybe that should be folded in. That's what I love about all this, that there are so many films from so many decades from all over the world. There is so much to see.
Posted by Claudia at 7:35 AM No comments:

Why they hate our freedom... in this case, 'they' being the right

A good article in the Times on the why of the healthcare reform debate.
Posted by Claudia at 12:18 PM No comments:

The cure for the Sunday night blues 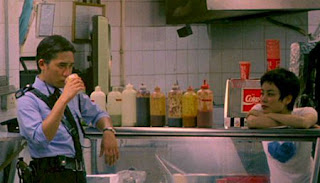 I watched Chungking Express tonight, embarrassing to admit it's the first Wong Kar-Wai film that I sat down and watched all the way through. It is so charming and lovely, featuring among other things a very young and very handsome Tony Leung, (pictured here) in his underwear, giving his stuffed animals and his kitchen dishrag pep talks.
Posted by Claudia at 9:28 PM 1 comment:

It's only socialism if it happens to someone else

On Political Animal, an irony-laden story about a far-right congressman from Maryland who led the charge against the public option during the lead up to health care reform. On his first day at work, he was shocked, just shocked to find out about a 28-day delay in commencement of his health care coverage. He then wanted to know if he could buy coverage from the government in the interim, pretty much the same idea as the public option.
Posted by Claudia at 11:06 AM No comments: 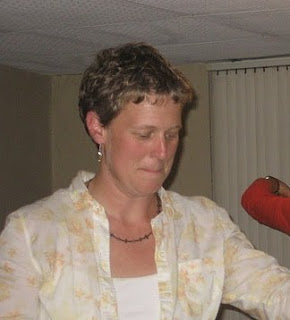 In August, I signed up for another round of salsa classes. This time, I decided to dispense with the angst of group classes and doubled down on classes with a private instructor that my dear pal Lillian recommended. The first visits to the dance studio were predictably fraught for me. I don't even think than in the first class we *danced* at all, as such. I was so nervous that I could actually barely move. With a little bit of extracurricular coaching from Lillian, my awesome teacher Franklin, and a commitment to attend one of the studio's practice parties each week, I have started to see improvement. I can often stay on the beat, can follow more complicated leads, and can often get my upper body and hips to move all at the same time. The challenge remains to do all of this while I keep my posture straight, breathe, refrain from looking down and sucking in both my lips as I do when I am concentrating (see me pictured here in 2007 for an example of exactly what not to do.)

The more important improvement for me is psychological one, though. I am way less prone to getting defensive when some earnest dance partner tries to give me feedback. My emotional recovery time for mistakes has been cut in half. Having a bad night is not accompanied by a downward spiral of emotional flagellation. It's not to say that there isn't some internal pressure going on. Because when you start to do something from scratch, if you don't employ some sort of self-criticism, then you won't make progress and you won't get better. But I feel like I am balancing the reckless abandon with the objective gaze better. I don't want to jinx it, but it is way more fun than it has ever been, really what the goal is in the end.
Posted by Claudia at 9:26 AM 1 comment: 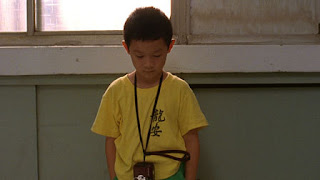 Few movies have stuck with me to the degree that Yi Yi did after seeing it in the theater. I watched it again last night and was reminded again how much I like it. It is the story of a middle-class Taipei family dealing with a variety of mundane challenges (the middle-aged father reconnects with his first love, the youngest son [pictured left] deals with teasing from his teacher and classmates.) There is so much wrapped up in this film about where we find meaning in our day-to-day work and school lives, how we appear to others, and how we can and can't see ourselves. It is slow-paced but totally involving if you give it time to work its way under your skin.
Posted by Claudia at 8:41 AM No comments:

I took a good look at my blog today and was struck by the fact that it is in need of a new fresh look. Blogger has a nice new tool for updating the template, so expect some trial and error until I get it how I want it. Feedback welcome!
Posted by Claudia at 2:35 PM 1 comment: 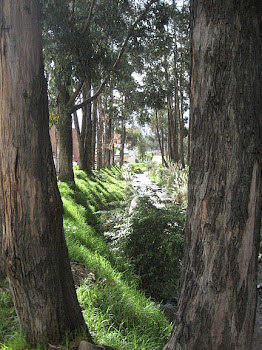